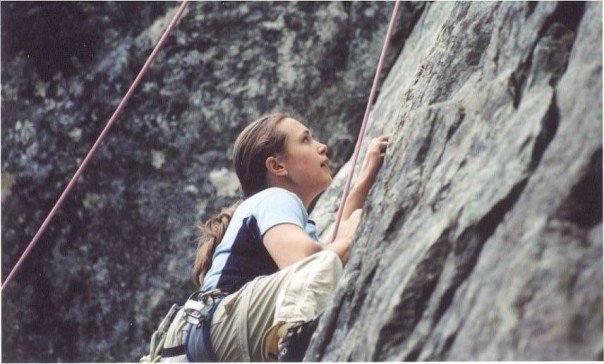 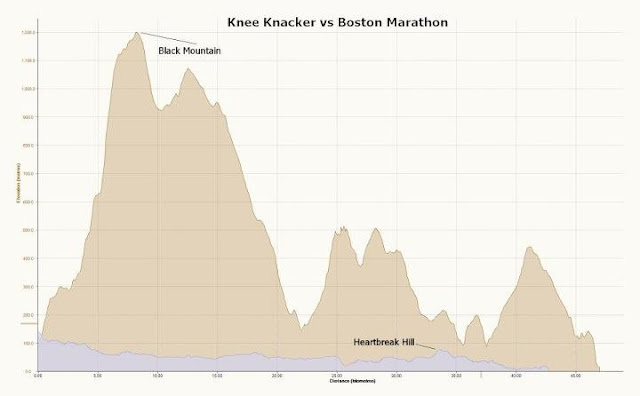 On Saturday I took part in the 24th (my 4th) running of the Knee Knackering North Shore Trail Run, a 30mile race along the Baden Powell trail from Horseshoe Bay to Deep Cove, travelling up, over and around the North Shore Mountains. 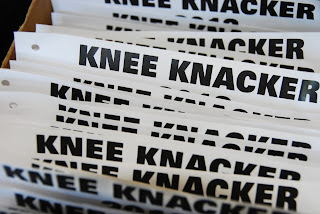 I was a bit nervous going into the race as it had been 3 years since I last ran it. I had been committed to the long weekend runs throughout my training, but didn't get out to cover as much mileage as I would have liked during the week. I was also a bit concerned that I had trained in the cool spring weather and now and race day we would be in the middle of a heat wave with high humidity. 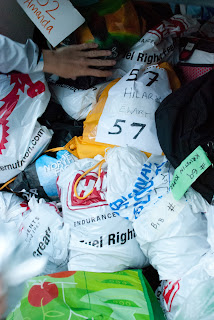 As we arrived at the start line at 5am on Saturday morning, the nerves changed to excitement and before I knew it, we were off! The first 45 min of the race or so was exciting but a bit painful trying to warm up and find my pace.  After about an hour or so though, I had settled into a comfortable pace that was stiff but sustainable while climbing up Black Mountain. 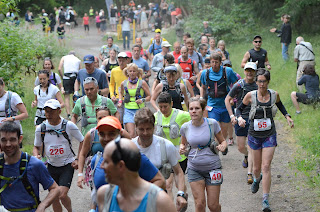 Part way up Black I decided to hang back for a few seconds to chat with Lara and found out that she was really not feeling well.  She sent me on my way preferring to travel at her own pace, and so for the first time ever, I was on my own for a Knee Knacker race! I must admit that I missed having my partner in crime around during the race. Although it was sometimes nice to be able to run my own race and follow exactly what my body wanted/needed me to do, I missed the company  and the encouragement to get me through the tough patches. I definitely had a dig a bit deeper than ever before to keep pushing through at times. 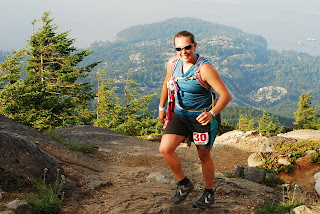 But, back to the race..... I was surprised at how good I felt climbing Black Mountain and was shocked to fell like I still had a ton of energy left in the tank when I hit the first aid station; I'm usually dying for some downhill by then. The view at the top of Black was extraordinary this week, making the hard work well worth it! It took me 2:30 hour to get to Cypress Bowl, the 1/4 mark and the first check point. I was happy to have a 30min buffer on the cut-off time. 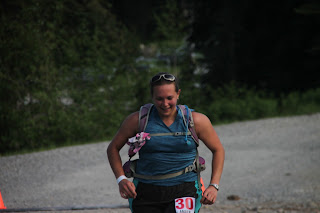 The second 1/4 was interesting for me.  We hadn't trained on the Hollyburn portion of the route at all this year, so it had been 3 years since I'd last run on this portion of trail and I was completely alone as I navigated the trails, creeks and mud pits. It was a bit unnerving at times, not being completely confident of the route up there, but it felt good to make it through without any mishaps. I was happy to arrive at Hollyburn Lodge and had a great time cruising down the descent to the 1/2 way check point at Cleveland Dam.  That long descent felt excellent, and although I know I have some work to do on my downhill running skills, it felt fun and a lot more effortless than normal. 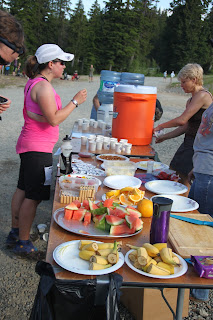 Coming into the 1/2 aid station was great fun. I loved having a few minutes for hugs and encouragement from my friends and family on route and at the check point.  I was sad for Lara when I learned that she had dropped at Cypress and I saw her at the check point, but unfortunately sometimes its not meant to be and its best to listen to your body and do what needs to be done. 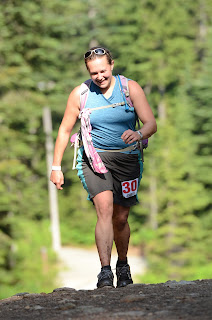 After a change of shirts and socks and a boost from everyone's encouragement, I headed up Nancy Green way towards Grouse Mountain.  The section up Grouse to St George's Bench as hot and humid and I was more that thankful to have a bag full of ice in tow to cool off with. I was also a bit discouraged in the race and difficulties to come when I learned that Lisa had also dropped and then ran into other running buddies who were having a bit of a rough time. 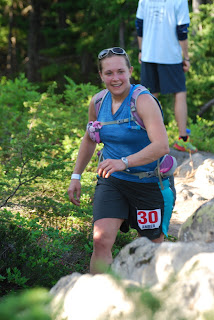 I had left the 1/2 way check point right on track for a 9:00hr finishing time, which would be a personal best for me, but I wasn't convinced at that point that I would be able to sustain that pace for another 25km. When   I hit Mountain Highway at just around 6:15  in and then the 3/4 check point at 6:45, still on track for a 9hr finish, I was shocked and excited.  I only had to hold it together for another 12km! and, Id never felt so good at this point in the race in the past. 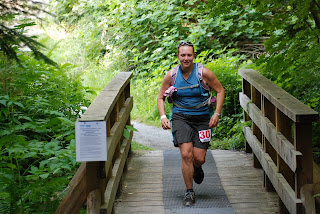 That section, as usually, felt like a bit of struggle; never quite being able to find a decent rhythm. But it was still an improvement over previous years as there was no cramping or nauseousness, and I ran significantly more than I normally do in that portion of trail.  It felt good to feel strong in a race for a change and to push a bit harder without crashing and burning (yet). After making it past the bench in one piece my confidence in being able to do this race on my own  and hopefully finishing strong was growing. 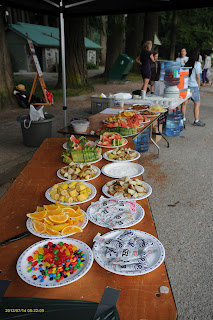 Unfortunately, this is where things changed. As I descended into the "bog" at Lynn canyon park I could feel the heat and humidity increasing and it was getting to me.  I did alright cruising through the bog, but the climb out to Lillooet road did me in.  I hit a wall was just dragging myself along the trail. It took everything I had to keep running, and running was only a consideration on downhills and sometimes flats at this point. If it weren't for the encouragement and cold sponges from the aid stations and  the company of Michael, the tasty Espresso Gel he gave me and the distraction from the suffering as we chatted and played leap frog through  the last 10km of the race, it would have been a rough couple of hours. 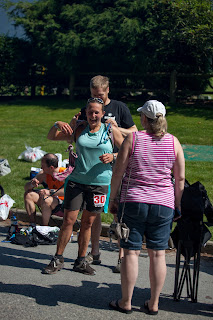 The friendliness, encouragement and camaraderie of the volunteers and fellow racers is what keeps me coming back to this race.  hike up the Seymour grind was a battle and took everything I had, mentally and physically, to get to the top. Knowing that it was my last big hill and that I had 5km of downhill coming my way helped motivate me to keep on pushing. When I hugged the post at the top of the grind (can't mess with tradition!), I was 8hrs 10min into the race and my hopes of a 9hr race and a PB faded. At that point all I wanted to do was finish, my time didn't really matter anymore. 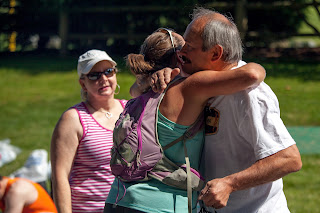 I struggled with some cramping and fatigue as I descended towards the old buck trail, but luckily for me as I pushed on my legs decided they were enjoying the downhill and with some coke, ice and snacks at the Seymour aid station I found the hit of energy I needed to step it up for a strong finish. Although I was tired, I was still feeling surprisingly good for being 45km into the race. 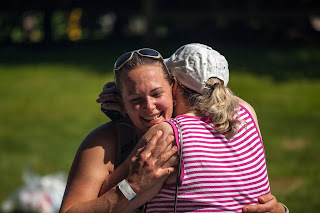 I cruised my favorite section from Seymour road to Indian River Road and then, even with a bit of battling on the uphill sections after the "7 Bridges of Hell, I ran the last couple kilometers into Deep Cove with more speed and energy than I have ever felt before in this section of race. It was actually even fun! As I descended the final stairs into Deep Cove I looked at my watch and it was just seconds over 9hrs, I was stoked! I was about to get a Personal Best! I cruised down the sidewalk and crossed the finish line at 9:02:00, 9min 57sec faster than my previous best from 2006. Yay! I couldn't be happier with the outcome. 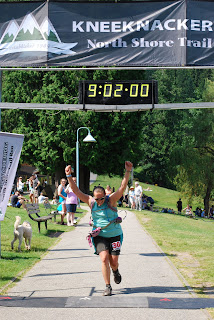 Overall I had a great day and even with the struggles, it was the best I have ever felt on the race and I can't wait to do it again in a couple years. A big thank you to my friends, family, run/training buddies, volunteers and race committee for all being part of making this a great event! 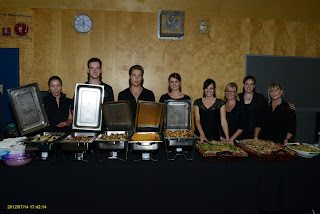 Newer Post Older Post Home
Subscribe to: Post Comments (Atom)
"Some days I need to Simplify my life to where all I think about is my next 20 steps instead of my next 20 years" - North Face Mountaineering